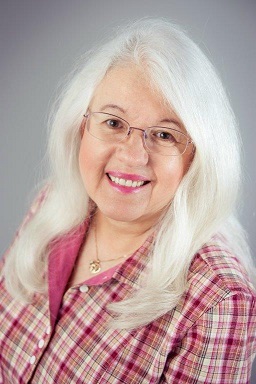 Walking into my first Spokane Authors and Self Publishers (or S.A.S.P..) meeting, I had two goals: 1) find like minded folks who might help inspire me to finish my own book, and 2) troll for an author to interview for this blog. The meeting went well enough that I plan to go back. I expected that it would, as my buddy D. Andrew McChesney, previously interviewed for this blog, had recommended it. What I didn’t expect was to find a “pot of gold”, in the form of Irish writer Kate Poitevin.

I noticed her book, among many, on a display table. The cover art suggested something I might be interested in, and the title hinted at adventure. Of course like any fantasy nerd, the moment I opened the book and found a map, I was hooked. Without extra copies on hand I was delighted to see that Kate herself was at the meeting. I made my way over and chatted her up a bit. She was kind, quirky, and cool. Thoroughly impressed, I ordered her book on-line as soon as I got home, and devoured it over the next two days.

“Saving Tir Gaeltacht” is a blend of Harry Potter-esque adventure, Irish myth, and Narnia Chronicles wisdom. In it, four siblings and one cousin are tasked with saving a kingdom and fulfilling a prophecy using skills none of them knew they possessed until accidentally stepping through a portal to another world.

Each child meets and bonds with a mythical creature who protects, guides, and teaches them how to survive in the magical land of Tir Gaeltacht. With many missteps, a few life lessons, and much humor, the children make their way across a vast land to meet a powerful enemy and fulfill their destinies.

Told from the perspective of a young bard, this story held my attention  throughout (a feat within itself) and, upon finishing the last page, I decided I had to interview the author. As luck would have it, she agreed!

Mj: So Kate, tell me a little bit about yourself. Have you always been a writer?

Kate: My first home was a float house on Coeur d’Alene Lake. My dad used to be a tug boat captain, and loved the water. His side of the family were all boatmen and my mom’s were lumberjacks. Whether it’s that history, or my Celtic roots, I do enjoy plaid flannel 😉

On my first birthday, Dad bought The Boat Drive In. We lived in the attached apartment for almost three years until my parents bought the house my brother and I grew up in. I helped out in the kitchen of the Boat Drive In until the age of 14, when they sold it. I was in my late teens when I first met my husband to be, Jim. We both moved away to separate areas and lost track of each other for ten years. Then in the spring of 1978, we bumped into each other at a pub. We were married by February of 1979.

After that, I worked at Taco Time for a while. I also worked as a ceramics caster, and a binder in a print shop. Eventually Jim and I bought and ran a concession trailer called “Murphy’s Corner” for 12 years. Retired now, my husband and I both love boats and finally have a sailboat of our own to enjoy.

My first writing experience was early in our marriage. At that time, Jim worked for a company that had a monthly news letter and I was invited to write a short article. I guess people liked it because they kept asking me to contribute after that. It wasn’t until I was invited to visit a local writers group, “The Tin Pencil” in 2008, that I got serious about writing a book though. My friend Mallory Battista founded the group that encouraged and helped me to finish the book. She also designed my cover.

Mj: That was a good group then!

Kate: Yes, and it still is.

Mj: Your bio on the back of your book lists you as a writer, artist, and clan chief. The writer part is obvious. Can you explain the artist and clan chief part to me please?

Kate: It says artist on there? **I point it out to her** Well then, I must be an artist! Actually, I used to cast, fire, and paint ceramics. Maybe that’s why Mallory said that.

Mj: Looking around I see many fantasy castles and figurines. Did you make any of these?

Kate: Yes I did some of them, but I sold or gave most of my pieces away. I did win a prize for one. It’s not a fantasy piece though. **She walks across the room and retrieves a beautifully life like ceramic Wood duck.** I won a Peggy Award for this. It was actually surprising to me. I entered the contest only wanting a little light blue ribbon for best of category. I was shocked the morning after judging when my duck was missing from the shelf, until my boss asked me to accompany her to the winners table. I was thrilled to see a little blue ribbon. In fact, I was so engrossed with the ribbon, they had to point out the giant trophy sitting next to it!

Mj: **LOL** Apparently you can be very focused. So what is this about being a Clan Chief?

Kate: I joined the Irish Clan Cian (pronounced Kee-in) in 2000 and moved up through the offices: Tent Assistant, Convener, and Chieftan, until becoming Regional Chieftan. My region includes Eastern WA, Eastern OR, and all of Idaho.

My good friend, Chieftain Debbie Hinshaw, and I go to the Highland Games around the northwest, and help people find their Irish roots. We also get to bring new members into the clan. It can be hot and dirty, or cold and wet work, but the upside is that we get to spend weekends watching men in kilts.

Mj: Well that is very cool, but your bio also lists you as a Fantasy and Sci-Fi nerd. Is that true?

Kate: **Gives that dazzling smile** Oh yes, I am a total nerd. I became addicted to fantasy novels 35 years ago when Mom gave me my first fantasy novel, “Arrows of the Queen” by Mercedes Lackey. She didn’t “get it” but thought it was a cute story. I, however, was hooked! From that I moved on to the “Earthsea” series by Ursula K. Le Guin, and from there to anything by Terry Brooks, Terry Pratchet, J.K. Rowling, Tolkien, and Anne McCaffrey to name a few of my favorites. Oh and I’ve recently become obsessed with Dean Koontz’ “Odd Thomas” series. Never read horror, but picked it up and fell in love with Odd. Beyond that, I’ve always been a Star Trek / Star Wars nerd and I proudly admit to being a Whovian.

Mj: Ah, nice to meet yet another complete and total nerd. This immersion in nerdiness explains some of your own book, “Saving Tir Gaeltacht”. As does your Irish back ground, but can you tell me what inspired you to write it in the first place?

Kate: Well, it started out as a story for my grandchildren, Gabe, Taylor, Jordan, Zach, and Zayne. They are the stars of the story.  I let them pick what their bond mates would be, and name them. Gabe, originally wanted a flying frog for his bond mate! I just didn’t know what to do with that, so I asked him to study some on mythical creatures. Thankfully he settled on the white stag.

In fact, many of the characters in my book are fictional representations of my actual family and a number of friends. I let them all pick a Celtic name, and tried to get their personalities right. My youngest daughter, Callie, is Kyla. Michelle is the lady warrior, Maeve. Son Kris is Declan, his wife, Josie is Molly.

Mj: So how close are the characters in relation to your grandkids? Are they a lot alike?

Kate: Yes, I tried very hard to make them see themselves. I never intended for this to be published, it was always just for them. I wanted to put in little family references so they would remember what they were like when that age. Zach and Zayne, who followed the story as it was written made sure that I had none of them do or say anything that the real one wouldn’t. In fact, one of my proudest moments was when a friend of mine finished reading the original draft and told me, “It wouldn’t matter if you changed the names of their characters. I would have known who they were just by how you wrote them.”

Mj: That’s a nice compliment! It really is a good read, but when can we expect a sequel?

Kate: Well actually, I am working on a prequel. It is Ronnie’s story. Ronnie was the dragon Jarth’s first bond mate, the one who helped create the prophecy, and set up certain safe guards for the young man who was to come after her.

Mj: Excellent! When can we expect to see this available?

Kate: As soon as I can finish it. I’m getting closer. The problem writers have is finding time!

Well, I for one, can not wait to read it! To order Kate Poitevin’s book, “Saving Tir Gaeltacht” just click on this link for a Kindle edition or paper back version. If you would like a signed copy, and live in the Spokane area, you can purchase it directly from Kate! Just drop her an e-mail at . . . katelaptop@murphyscorner.com.